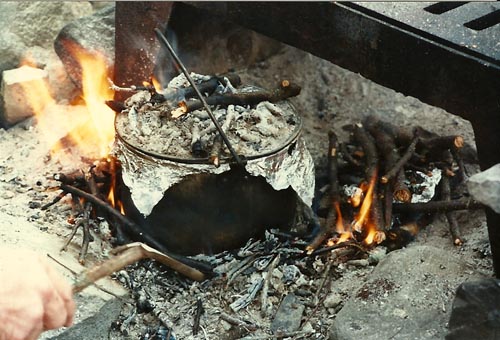 I learned a lot from Doug on this camping trip. Who knew that one could bake in a camp fire?

One of our first dates was a week-long trip to the Boundary Waters in upper Minnesota. By then we had a pretty good idea that we liked each other, but this was still an important step in our courtship. This would be my fourth trip to the wilderness canoe area, and I wanted to impress Doug with my mastery of all things outdoors: handling a canoe, putting a worm on a hook, starting a fire with one match, reading a wilderness map—I wanted to take him camping. It’s hard to clearly remember, but I don’t think I had yet grasped the depth of Doug’s mastery of the outdoors. Here was a man who, aside from being an Eagle Scout, had been a back country guide in New Mexico, a white-water canoe guide in Maine, had run Colorado’s rivers as a rafting guide, had earned his EMT in his spare time so that he’d feel better prepared during rock climbing emergencies, and possessed copies of his mother’s best recipes.

We had an idyllic week. Mysteriously, there were no black flies or mosquitoes. On one golden evening as we sat on a rock edge over looking the water, watching the sunset, the sky became darker and we were captivated with the brilliance of the Northern lights. Really, it was magical.

As for showing off my mastery of the outdoors, I gave up map duty on day one after getting us quite lost. Only by asking some fisherman did we find out that we were in the lake named, aptly, Lake of Confusion. Yet, I was a good sport in the middle of a down pour and impressed Doug by saying how fun it was. I made a passable camp fire, and was able to successfully feign indifference while putting a worm on a hook.

However, nothing could compare to Doug’s expertise with camp-cooking. He nursed the fire until the coals were evenly hot, mixed up some brownie batter from a homemade, dry mix we had concocted in his apartment in Chicago, then poured it into an aluminum pan which he then placed inside a dutch oven. Doug then buried the entire thing in the coals, creating a campfire baking oven. What a delicacy to have fresh, hot brownies on a wilderness trip!

And on one chilly morning, once again I was amazed by Doug’s camp-cooking ability. Using the dutch oven, he baked up some of his mom’s flaky biscuits.

I guess we each passed each other’s wilderness test. This morning, over 20 years later, using our regular stove, Doug mixed up a batch of biscuits in our kitchen. If you ask any of our kids, they’ll tell you, “Dad makes the best biscuits.” 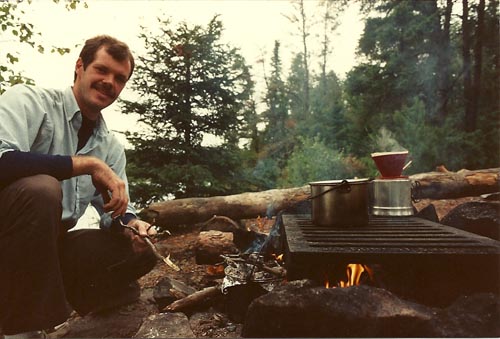 Doug had everything covered: brownies in the oven; coffee on top.

Here's a picture of the brownies, just coming out of the camp fire. (I was taking pictures of food, 20 years ago, while camping?)

Cut shortening into dry ingredients. Add milk all at once. Stir until just mixed. Turn out onto floured board. Knead about 20 times. Pat out on a floured board, about 3/4″ thick. Cut and bake at 450 degrees for 12-15 mins. Makes 12-14 biscuits. 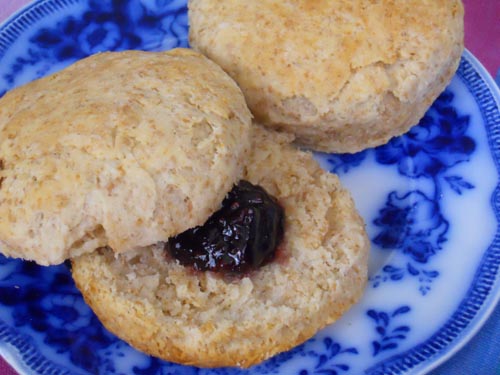 You can see how flaky these are.